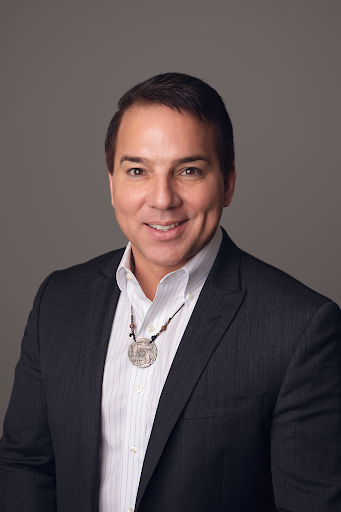 Richard G. Sneed life’s work has been one of public service advocating for youth, community building, and cultural preservation.

The son of a businessman and former councilmember, he knows that hard work and a community-centered focus enable collective opportunity. In this vein, he has worked throughout his career to ensure that Cherokee people have equitable access to quality education and can put these skills to work in a community they can be proud of.

Having grown up in Wolftown, on the Qualla Boundary, he values being rooted in a community that honors family, culture, and progressive thinking. After graduating from Cherokee High School in 1986, Richard Sneed served in the United States Marine Corp for four years. is HHis beloved wife Colene is a citizen of the United Keetowah Band of Cherokee Indians. He is the father of five children, Breanna, Richie, Mattilynn, Katrina and Samuel. Sneed earned his degree from Universal Technical College in Phoenix, AZ, and holds a North Carolina Teaching License in Industrial Arts.

While pastoring the Christ Fellowship Church of Cherokee for fourteen years, Sneed also taught vocational education at Cherokee Central Schools for twelve of those years. Whether teaching students to rebuild an engine, or counseling them through fiscally responsible financial planning, his excellence in the classroom earned him recognition as the National Classroom Teacher of the Year by the National Indian Education Association in 2013. He continues to be a highly sought-after motivational speaker, focusing on youth leadership and empowerment.

Since taking office, Chief Sneed’s administration has been dedicated to exercising the EBCI’s sovereignty, including growing relationships and partnerships, in part, through his service to the WCU Cherokee Center Advisory Board, United South and Eastern Tribes (USET), and the Cherokee Preservation Foundation Board of Directors.  Chief Sneed has also recently been elected as the Vice-Chairman of the Center for Disease Control’s Tribal Advisory Committee.

During his time in office, Chief Sneed has successfully passed legislation that enhanced transparency, accountability, and economic opportunities for the EBCI. He believes in the unrestricted potential of the Eastern Band and its ability to sustainably meet the needs of its people. By investing in a long-range vision that responsibly balances resources with the needs of the Cherokee people, Principal Chief Richard Sneed is committed to ensuring that the Eastern Band of Cherokee Indians continues to thrive for generations to come.