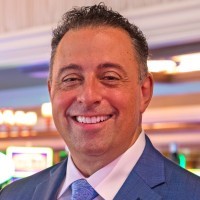 Gregory Goll is Vice President of Safety and Security, and oversees all aspects of Security and Safety at Palms Casino Resort and Palms Place Hotel and Spa.

A native of Milwaukee, Wisconsin, Greg moved to Las Vegas in 1989, and was on the opening Security teams for The Mirage, Treasure Island and Bellagio. He transferred to New York-New York in 2006 as Director of Security and Safety, moving his way up to Vice President of Security and Property Operations. He led the Security, Engineering, and Safety teams in the opening of The Park, was on the taskforce for the opening of National Harbor and was involved with the campaign taskforce for the Springfield development.

Under Greg’s purview, the Security department at New York-New York was named an Inaugural Winner of the 2nd Quarter 2013 Chairman’s Service Award.

Greg is a member of the Las Vegas Security Chiefs Association, American Society of Industrial Security, and Infragard. He currently holds a Private Sector Clearance through the Department of Homeland Security.

Greg earned his bachelor’s degree in Criminal Justice from the University of Nevada, Las Vegas. He also received his associate’s degree in Police Science from Milwaukee Area Technical College.