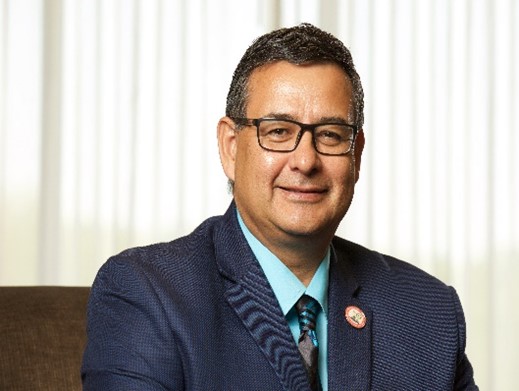 Mark N. Fox is the Chairman of the Three Affiliated Tribes, the Mandan, Hidatsa and Arikara Nation (MHA Nation). He began his public service in 1985 by serving in the United States Marine Corps. After earning his law degree in 1993, he worked for the Tribal Legal Department and later began serving as the delegate for the North East Segment – Parshall/Lucky Mound on the Tribal Business Council. He served two terms (1994-2002) on the Tribal Business Council as Treasurer and Vice-Chairman. Opting to serve the MHA Nation in an administrative capacity, he worked as the Administrator for the Gerald Tex Fox Justice Center, before serving as the Tribal Gaming Director and later the Tribal Tax Director. In 2014, he sought to serve in the only at-large position on the Tribal Business Council and was elected Chairman. Chairman Fox was re-elected again in 2018, currently serving in his second term.

Chairman Fox is renowned for his experience and expertise in taxation, gaming, energy, and economic development. He currently serves on three federal agency advisory boards for the: Department of Energy, Department of the Interior, and the Environmental Protection Agency and is a member of the National Petroleum Council. In addition, he serves the National Congress of American Indians as Co-Chair of the Land and Natural Resources Committee and Chair of the Energy and Minerals Sub-Committee, and as the MHA Nation delegate to the United Tribes Technical College board.

A fierce proponent of tribal sovereignty, Chairman Fox, has dedicated his administration to developing and implementing long-term economic sustainability. Under his leadership, the MHA Nation has developed employment opportunities and increased wages to raise the standard of living for all tribal members; expanded and enhanced the tribal infrastructure and transparency in governmental affairs; and vastly raised tribal member’s assistance in the areas of health, education, and addiction and recovery services.

Chairman Fox is a staunch supporter of youth and community development and has enjoyed competing in running, biking, and swimming endurance events over the years. He is also a diehard fan of the Dallas Cowboys.